Rocking machine, also known as swing machine, swing car, children's coin shake machine, rocker, etc., is a kind of amusement equipment, as the name suggests, swing machine will shake, but the specific rotation does not have full entertainment Sex, swing machine front plus a painting screen or LCD animation, dynamic animation, also with MP3, while the music at the same time swing, so that children both visual and auditory enjoyment.  Swing machine game machine, the appearance of novel, colorful, is a young child friends are very fond of the ride of the game machine. Swing machine after the start of the body up and down before and after the shake. This product is suitable for the purchase after the child at home to the child when the toys, so that children grow up in the fun of learning, but also for the park playground, Children's Palace, life square, community, supermarket shopping malls, supermarkets, children's stores, shopping malls And other densely populated places placed investment, the product cost is small, high return on investment, no personnel management. The product is made of glass fiber reinforced plastic, with environmental protection, safety, corrosion resistance, good stability and so on.  One such simple killer application  Residential club in front of the coin-operated electric swing machine (or called the rocking car), my daughter's monthly contribution to the average ARPU is at least 20 yuan. Check the price of this device is the most expensive about eight hundred yuan (with multimedia features, rather than the old-fashioned revolving light)

Power, but more than two hundred watts, the principle is extremely simple. Put three, in a few hot days of the day, the children often need to wait in line.Called killer applications. And no one would buy such a silly big dead device to go home, so the charges shook in mainland China for many years. Every time squatting in the coin-operated electric swing machine before the daughter down, I will dream, if I can invent and register such a principle is extremely simple, ARPU high, give the user joy, the buyer has the power to continue How good is the patent for upgrading? Of course, if this is a patent protected country, as a patent holder, will there be something to take money. (In addition to the home to sleep also make money business, in addition to Guoguangguang once evaluated independent third party payment is "the only can be achieved at home can also make money, and is long, once the amount of business users accumulated, is very fixed, as long as the information From the system through, you can make money "outside.

So this killer application is no exception to the following restrictions:  (Mainly between 1 year and 3 years old); relying on the presence of other applications, so there are restrictions on places (mainly children guardians have to go through every day or place, such as residential club entrance, traffic Big business door), but as long as the location is right, the average daily per child at least 2 yuan, or even up to 5 yuan. By the surrounding children's birth cycle restrictions, such as from 2007 onwards for three consecutive years of baby birth tide. It is not an independent third party to pay or line to facilitate the payment of cattle. )  "Shake the car" shake out the problem  Jinzhou New District in a lot of supermarkets, restaurants and other places of business at the door, are placed for children to play coin-style "shake car."These "shake the car" to increase the popularity of business, but also to the children brought a lot of happiness. However, the reporter found that these "shake car" there is security and health and other aspects of the hidden dangers. The child is difficult to "shake" charm

Reporters in the small Gushan West on a way to see, just 100 meters there are six "shake the car", and some in the supermarket door, and some in the pharmacy door. "Shake the car" mostly children favorite "Pleasant", "Wolf" and other animal modeling, but also "Altman" and other cartoon characters modeling. After the coin, the car will swing with the children song up and down. 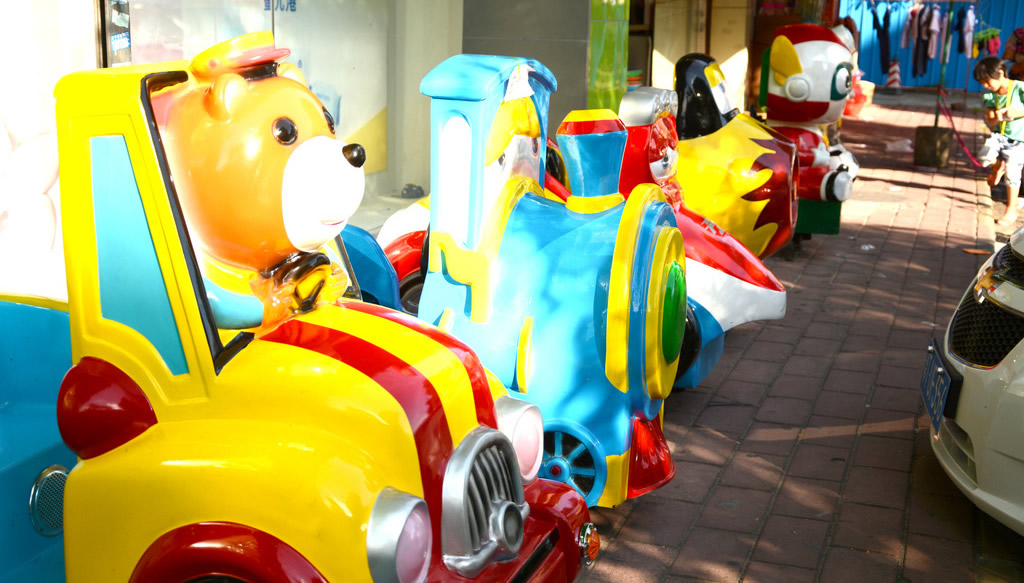 In a supermarket door, side by side placed two "shake the car", and no staff care. A pair of mother and son came to the supermarket, the mother left the child a few yuan coin to play "shake the car", went straight into the supermarket shopping. The 5-year-old children took the money to play coins coin up. He told reporters that he often went to the supermarket with my mother, my mother went to buy things, he himself at the door to play "shake the car." The mother told reporters that the child is very fond of playing 'shake the car', not to sit do not go, up to one day cast more than 20 coins.  Subsequently, the reporter visited a number of business premises in the new district and found that "shake the car" is very common, the reason is that this "financial tools" do not need to store or booth, or even no special duty, through power can produce benefits.  Noise disturbing neighborhood disturbed

"My family downstairs 'shake the car' from early to sing late, quarreled everyone can not rest." Who lives in Heng'an Garden District, 8th floor, Ms. Guan told reporters that her family on the first floor of a store placed in front of two " Shake the car, "" shake the car, "the child rumors always from around 6 o'clock in the morning and her family quarreled at night to sing around 11 o'clock, so that the nearby residents affected by noise.